Huge fires are raging in California, fanned by strong winds yesterday.  Looking for maps online… and there’s not too much available if you wanted to know which way to run.  Of course, you’re probably not sitting at your computer, but more likely talking to the competent guy with the orange hard hat who is patrolling the neighborhood and has up to the minute routing information.  Disaster response is still a tricky application for GIS.  Getting the correct information is the hard part.  All those California GIS guys are ready to go, but probably waiting for a phone call or a shape file. 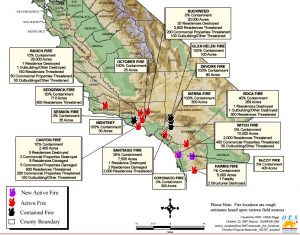 The helpful Google fire map above was created by KPBS Online, Sandiego TV/Radio station, presumably including information from listeners calling in.  (Interesting how the fire stops conveniently at the Mexican border.)   The static map (right) was made with ESRI software by the OES (Office of Emergency Services), displayed on their website.  Interesting, and shocking, but not very helpful to the locals. 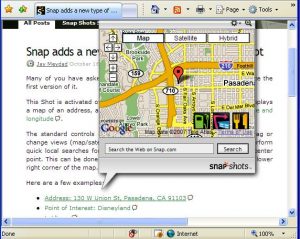 Snap Shots (formerly Snap.com) has launched a new feature with great potential.  They warn that it is still “beta”, and needs to be improved, whatever that means.  (I’ll try it in the next post.)  SnapShots is the free website “plug-in” which puts the little balloon next to all the outside links on my webpage, and if you hadn’t noticed, hover on the balloon and an image of the page linked-to pops up.  These little pop-up windows are irritating to some people… at least some vocal people in the blogsphere say they should be banned.  Maybe they are not all that useful.  However, this new MapShot feature (a fully-functional pop-up Google map), with a built-in “local search” for restaurants, hotels, etc. could be used creatively (think online directories, travel sites, New York Times…). Who is snap.com? Snap Technologies is one of the Idealab companies. Idealab is the renown technology incubator, based in Pasedina CA, founded in 1996, with former fledgelings including PETsMART and Picassa. 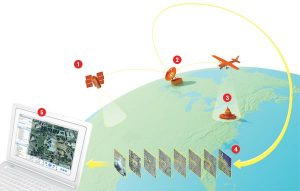 There’s a nice article in Technology Review, How Google Maps the World, with a simple explanation of the process from satellite to website.  Makes it sound so easy.  By the way, the company producing most of the high resolution satellite images is DigitalGlobe, and if you want to buy just one of the little snapshots, say a shot of the Dam Square  as an 8 x 10 print, it will cost you $19.95, so I guess we can be happy Google is footing the bill for the earth.  (Thank you Richard.)