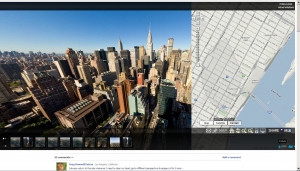 Reminded by Google Maps Mania about this remarkable and entertaining website created in 2009 by Australia firm, Pixelcase. I saw it then, but it seems they have added a lot of new tours, and some new, cool controls, including the ability to view images in Normal, Fish-eye, Architectural, Stereographic and Planet views. It is great to see the images in all these different perspectives, clear as a bell. Check out this image of Central Park in Stereographic. Is that the sun?

Update 8/1/2019: It seems that in 10 years, the aerial tour is no longer available, and Pixelcase has morphed into an Augmented Realty (AR) company.  More on this some other time.

360Cities describes itself as “the web’s largest collection of stunning, geo-mapped panoramic photos, created by a network of thousands of expert panorama photographers from around the world.” The photos are all visible on their own website via a Google Map, and since November 2010 approved exterior photos have been included as a photo layer on Google Earth. This is fascinating concept which could also be applied on a local (neighborhood) level to create a nice 3-D tour.

Big news on May 28th when Google released a Plug-in which makes it possible to view Google Earth, including 3-D buildings and KML files in a browser window, without downloading the full version.  Very much excitement about this, and there will certainly be some great applications very quickly.  Exploring this topic, an interesting application for US boaters surfaced.  EarthNC is a low-cost application/service which allow the user to add all kinds of water charts for US coastal and inland waters to Google Earth — online or offline.  It looks amazing (though I don’t have any charting know-how), and appears to have been enthusiastically received. Hope to hear back from them about whether a Dutch / European version is on the way.

This same developer (EarthNC) has just released an online converter which allows you to create Google Earth Plug-in code with your own KML files or MyMaps URLs, which can then be embedded in your website.  TakeItWithMe for Embedded Earth is in “Beta” form, but works handily (Not any more). 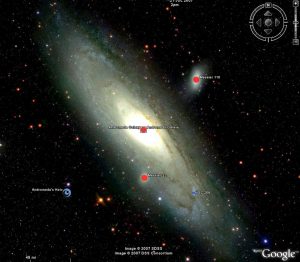 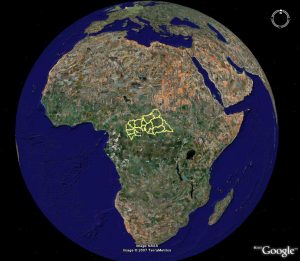 Central African Republic in Google EarthWhile we are on earth, there are things we should not forget about.  (Before we soar into space that is.)  GEB (Google Earth Blog), pointed out this Central African Republic KMZ, created by Humanitarian and Development Partners in CAR.  Dozens of layers provide information about this country, not far from Darfur. This is related to the Google Earth Outreach program announced in June.

These two images give an idea of the visual impact. 1) Africa is enormous, looks like half the earth here, with CAR outlined like a heart in its center, and

2) zoom in to the town of Bangui and it is just a village, with coffee shops, a Chinese restaurant, a football stadium, university, and government buildings, along a great winding river. So much to be learned here! 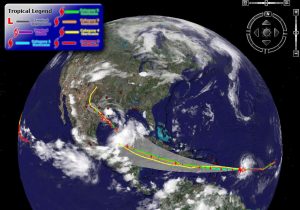 Storm Tracking Google Earth Blog has posted an amazing collection (a “network link”) of weather tools from a variety of sources.  This is a wonderful assembly by various authors, including live weather images, and animated projections of hurricanes.  GEB has organized them in a way which is very easy to use, and the layers only turn on when you select them (unlike may other kmz files which load automatically), so it does not surprise you by taking a lot of time or computer memory.  Drag and drop from their site did not work for me, but the KMZ file can be downloaded or opened from here. The blog article also explains the value of “network links” in Google Earth.

Update 31-5-2018:  Many of the links here seem no longer useful.  No doubt there are many new sites and apps for hurricane tracking.  Google has their own highly-rated Android app, Seastorm.