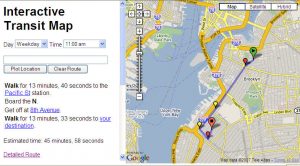 Stumbled on this one today, which could be useful to friends and family, the NYC Transit Map.  This unassuming programmer Greg Brail has a day job and doesn’t seem to want to be bought by Google or anyone else.  The applet has been on the Internet since 1996.  About 1000 people use this per day, but this tripled on Sept 11, 2001.

28-05-2018 update: The link above no longer works. Google themselves incorporated public transportation onto their maps in June 2012, releasing transit directions for 475 regions around the world. (Not sure when exactly NYC subways were included.)

See the blog for developments in the Google Maps Platform since 2008.