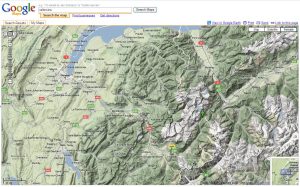 You can’t take your eyes off them for a second.  Terrain view in Google maps adds a new dimension.  It is not as powerful as its counterpart in Google Earth, where elevations can also be measured and displayed.  Not yet.  But more is clearly on the way.  Last week they also launched collaboration “MyMaps“, which is bound to spearhead a huge new category of online map applications.  And finally, another major announcement, push-button import of KML, KMZ and RSS files into MyMaps.  This was possible with a little programming (using the API) before, but now everyone can do it!  (Well, sort of.)