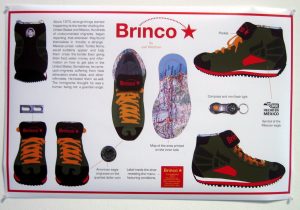 Two contemporary artists using maps in their work exhibited recently at the Tate Modern in London:  Judi Wertheim’s Brinco project was featured in “The Irresistable Force” at the Tate in London.  When originally staged in San Diego in 2005, the Argentinian artist ”gave some pairs away, to immigrants trying to cross from Mexico to the United States. She designed her show with them in mind, since it includes a detailed map of the border area on its inner sole, an attached compass and mini-flashlight, as well as a picture on the heel of a Mexican priest, Toribio Romo, who, in the ’70s was thought to be a “guardian angel” for those crossing the border”, according to the San Diego Union Tribune. 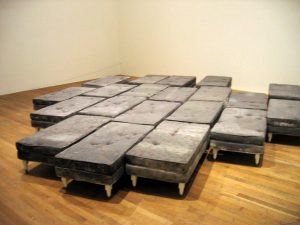 Another room was entirely filled with map-covered beds by Guillermo Kuitka, also an Argentinian (coincidence?), whose large-scale works are often inspired by cartography.