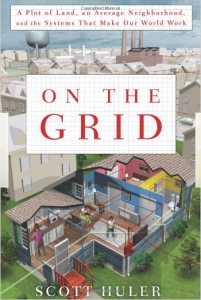 Just finished this excellent book by Scott Huler, “On the Grid“.  This is Everyman’s guide to infrastructure in America.  The author points out both the miracles and the mind-boggling failings of the US systems from storm water management in Raleigh NC, to the bridges across the Hudson in New York.  He writes”No matter how often someone reminds us that these systems are important and need our attention, we don’t change.  China spends 9 percent of its gross domestic product on infrastructure; Europe spends 5 percent, the United States spends about 2.4 percent, and that’s down from 3 percent 50 years ago.”  His advice: “Get out your wallet.”  (And buy his book, for starters.)

Meanwhile, “Off the Grid“, written by Nick Rosen, champions an alternative lifestyle chosen by a handful of Americans who attempt to live their lives on their own steam, as it were.  As he says in a great NPR interview with both authors, “living off-grid doesn’t mean doing without electricity and water–it means providing your own electricity and water.”

Where in the World is the World Cup? GIS Geeft Energie
Scroll to top