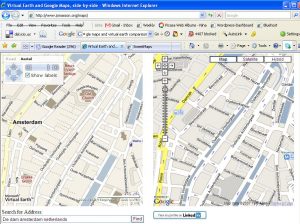 To compare the coverage offered by these two Web online mapping tools, a programmer, Ryan Jonasson, in South Dakota has come up with a “side-by-side” viewer. While Microsoft’s VE is really a cross between Google Maps and Google Earth (right now), it lacks detailed “aerial” views outside of the US, UK and France.  (The default on this viewer is “aerial”, so be sure to change to “road” if you zoom in to a European city.)

Update 30/5/2018:  None of the links above work any more. Both Bing and Google maps have greatly evolved.  Back then, it was early days. Here’s a more recent comparison of features Bing maps vs. google
In June 2017, MakeUseOF published this comparison of alternatives to Google Maps: Six Google Maps Alternatives. These include Bing, Waze, OpenStreetMap, Mapquest, Rand McNally, and Here. Pros and cons for all. More about this later.
And then there is maps.me