This RIVM (Rijksinstituut voor Volksgezondheit en Milieu)website includes a comprehensive Atlas of public health in the Netherlands.  For example, this map of smokers in the Netherlands, by region. While the average has dropped since 2001 from about 33% to 30%, there has been little change despite bans on smoking in many public places in 2004.  The 30% rate, according to the BBC in a November 2004 article, was higher than all other European countries except Spain, Greece, and Germany.  Also to be noted, in September 2007, RIVM launched a new “Milieuportal“, targeting environmental professionals (and consumers), tracking air and water quality. 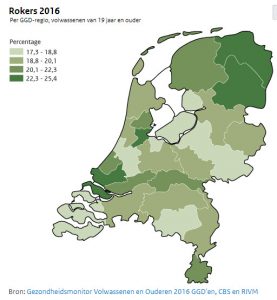 Update 28/5/2018:  The Atlas website has a new link.  The latest smokers (rokers) map does show a large drop.  It would be interesting to look at the data sources, but the maps give the picture.  Highest rates in 2016 are 10 points lower than 2004 values.  The Milieuportaal seems to have disappeared, but the RIVM site has a wealth of information.